Over 200,000 Laser sailboats have been built over the last 40 years, more than most other small dinghy sailboats. In this article we are going to answer some of the common questions we receive about the basics of Laser sailboat rigging, how to tell what size rig you have, what you can upgrade, and more. This information is designed for the recreational sailor who is simply looking to replace missing parts or install simple upgrades that make it easier to enjoy their boat.

As a note, we're going to make frequent reference to a rigging manual put together by Vanguard Sailboats about 10 years ago. We still refer to this guide often as it shows two different styles of rigging side by side, which is particularly helpful if you have an older boat you wish to upgrade.

What size rig do I have? Standard vs. Radial vs 4.7 Explained

The Laser sailboat has had a number of different rig sizes, with the intention of making the boat sailable by a wide range of sailors (and different sailor weights) by simply swapping out the lower mast section and sail while keeping all other components the same. There are currently three different rig sizes and they are commonly referred to as 'Standard', 'Radial' and '4.7'. Below you will find an image that shows the three rigs side by side, and in the following section we'll explain each one.

This is the most common Laser rig size, and the original rig on the boat when it was designed. It features a 7.06 square meter sail (about 76 square feet). In 2018, the Laser Class approved a new 'Standard' sail, which is referred to as the 'MKII' or 'Mark 2' to distinguish it from the first version. The difference, among other things, is in the panels. The original 'Standard' sail featured horizontal cut panels. The new MkII sail has radial cut panels. There is no difference in size between these two versions, and as of 2020 all new Laser Standard sails are available in this updated cut. 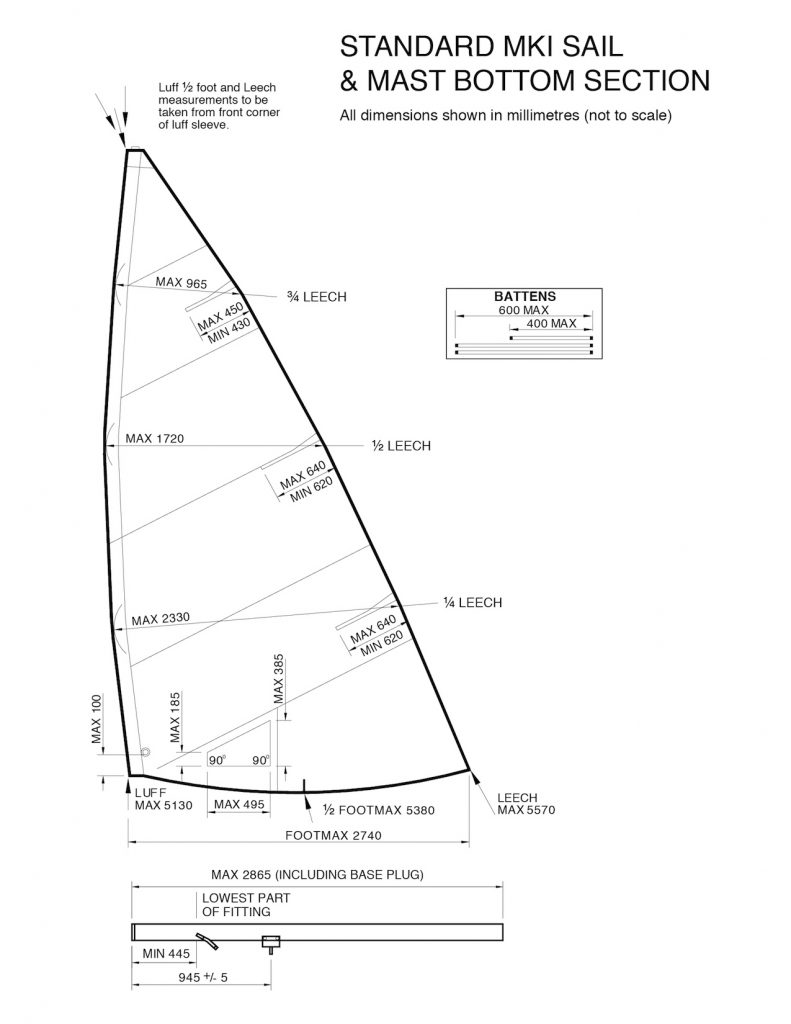 Originally called the 'M' rig when first designed, the Laser 'Radial' sail is smaller than the 'Standard' sail at 5.76 square meters (62 square feet). At the time, it was the only Laser sail to feature the radial cut panels, which allowed the sail to be de-powered more easily in bigh winds. Per the notes about the 'Standard' rig above, both the Standard and Radial sail feature the radial cut design. Another typical indicator of a Radial size sail are the blue panels at the tack and clew of the sail. 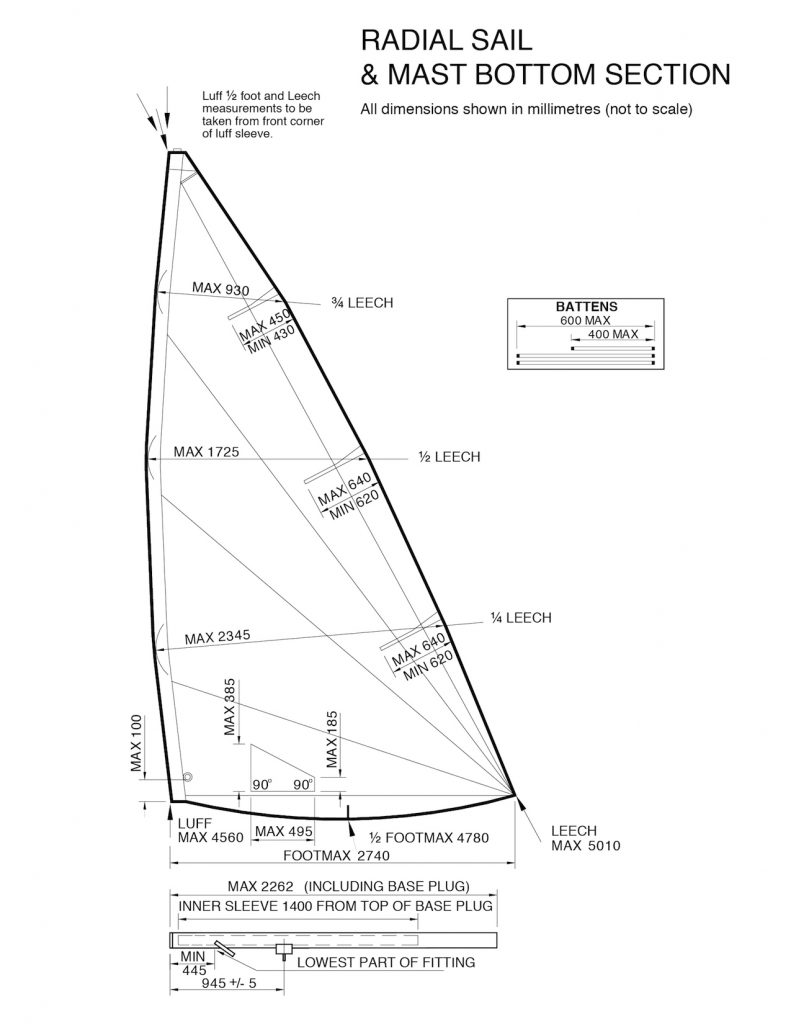 How to tell if you have a 'Radial' sail: The first and most obvious way to tell if you have a 'Standard' sail is to look at the panels. If they are radial, as in emanating out from the center, it is most likely a radial sail. Next, you can measure the luff (the front edge of the sail along the mast sleeve). This measurement should be about 4560 mm or 180 inches from the top of the sail to the bottom.

The Laser 4.7 (or ILCA 5) is the smallest of the three Laser sails and was designed for young sailors just getting into Laser sailing. The 4.7 lower mast section is also different from the others in that is has a pre-bend near the boom fitting, allowing the sail to depower much easier. This is the least common Laser sail size, and if you have an old one around, chances are it is not a 4.7 sail. 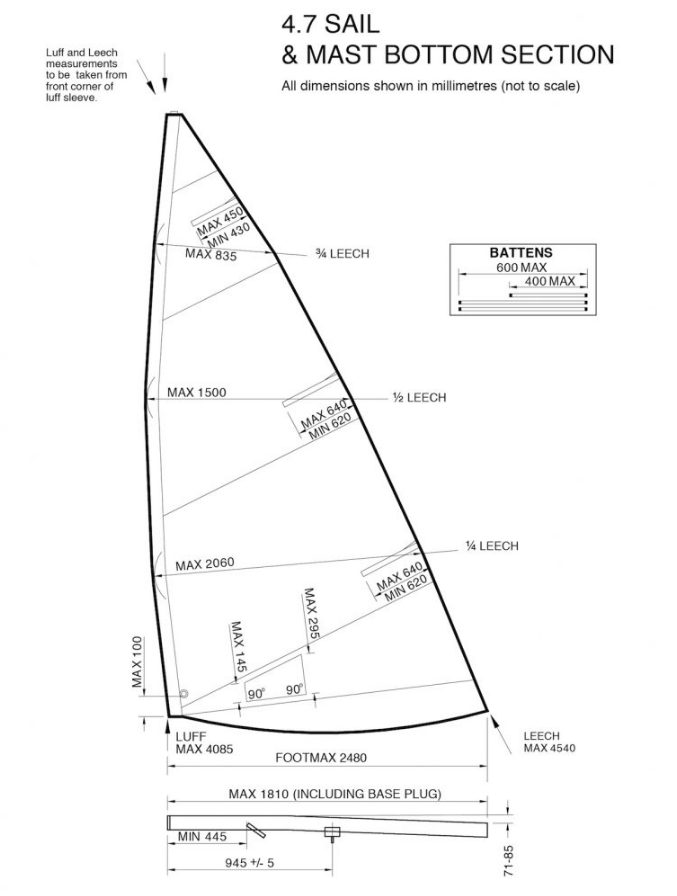 How to tell if you have a '4.7' sail: The 4.7 is similar to the old 'Standard' sail as it has cross cut panels. Many 4.7 sails also have an obvious 4.7 logo somewhere on the cloth. Next, you can measure the luff (the front edge of the sail along the mast sleeve). This measurement should be about 4080 mm or 160 inches from the top of the sail to the bottom.

What is the difference between 'Race' and 'Rec' rigging?

Up until about 20 years ago, the Laser featured very basic boom vang, outhaul, and cunningham controls. These were basically just long lengths of line with a series of loops and knots designed to create 'purchase' or pulling power to help tighten the controls and further shape the sail. In many ways, these rudimentary controls limited the type of sailor who really excelled in terms of performance, as you needed to be very strong and athletic to control the boat (you still do at the very top of the racing scene, particularly if you hope to compete in the Olympics). If you have a 30+ year old boat that hasn't been updated, chances are it is a 'rec' rigged boat. There is no problem sailing a Laser like this and many sailors enjoy the simplicity of the rigging and low cost of replacing line and parts. 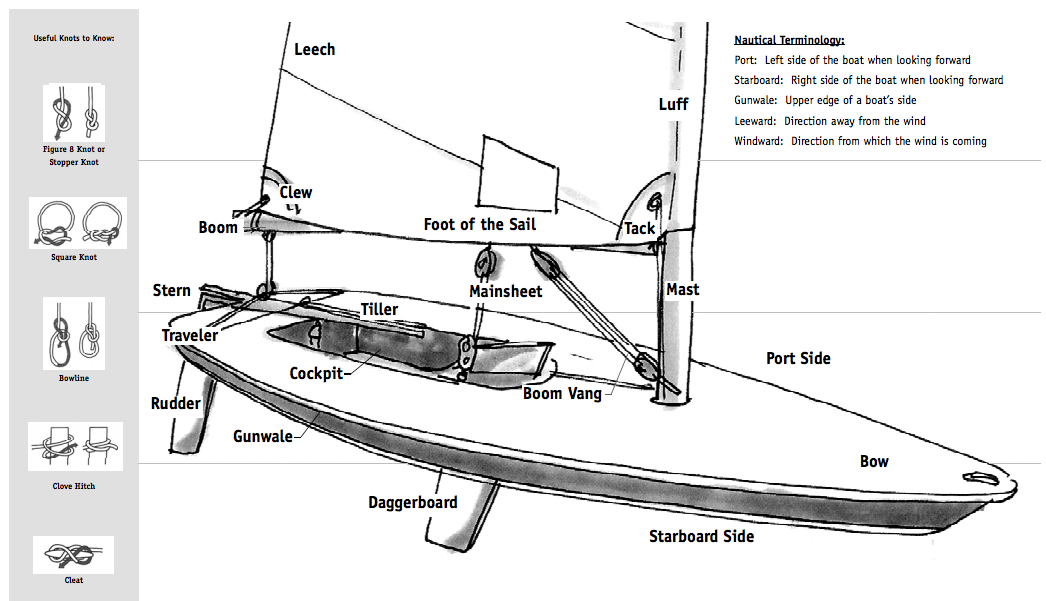 In 2000/2001, a new set of controls was approved, designed to make it easier to manipulate the sail (particularly for lighter sailors) and to rig/unrig the boat. These included a 15:1 boom vang, 8:1 cunningham, and 6:1 outhaul system. What was introduced at this time was and is still referred to as the 'Race' or 'Pro' set up, as opposed to the 'Recreational' or 'Standard' set up found before 2000. Between 2000 and 2010, many active Laser sailors upgraded their existing boats to this new standard with a series of kits (these are still available) and new boats started to include them. Starting in 2008/2009, basically every new Laser sailboat included some version of this upgraded Race rig set up. Lets take a look at how to quickly tell if your current boat is set up as a 'Race' or 'Rec' boat and then some of the differences between the two set ups. 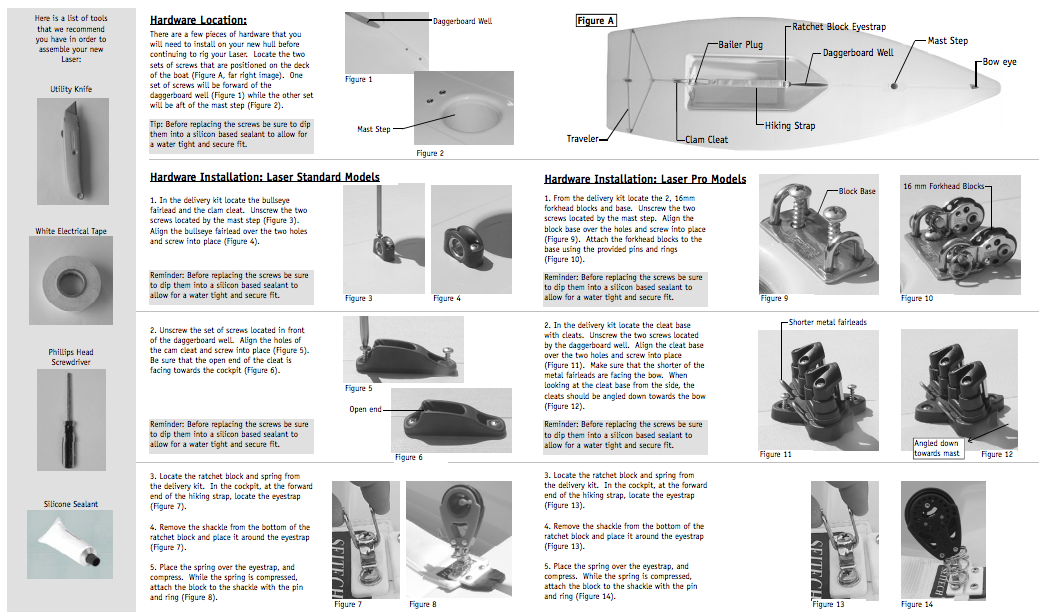 The most common question we get is how do I tell if my boat is set up with Race or Rec equipment? The quickest way to find out is to look at the hardware mounted on the deck of your Laser. Refer to the image above.

The 'Rec' setup (or 'Standard') is shown on the left, and the 'Race' set up (or 'Pro') is shown on the right. The Rec set up features a single bullseye fairlead just aft of the mast step and a single clam cleat just forward of the daggerboard trunk. These two pieces of hardware are for the cunningham control line.

The 'Race' setup (or 'Pro') is shown on the right, and features more advanced hardware. This hardware includes a deck plate with blocks just aft of the mast step (replaces the single fairlead) and a dual deck cleat in place of the single clam cleat. This new system allows both the cunningham and outhaul line to be lead down the mast and back to the cockpit for easy cleat/uncleat and adjustment from the new deck cleat system.

Insider Tip: Upgrade to 'Race' Rigging with just two kits! Back in 2000, Laser builders knew that sailors with existing boats would want a way to quickly upgrade from the 'Rec'/'Standard' rigging to the upgraded 'Race' rigging. For this reason, we still offer two kits just for this purpose. 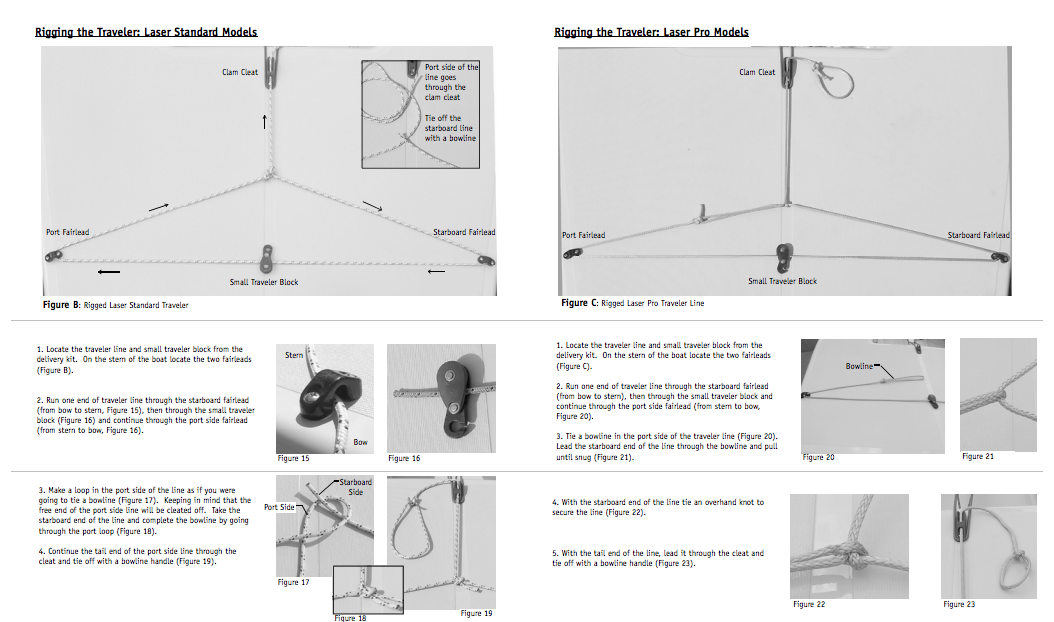 The rest of the hardware on a Laser deck is the same, regardless of what rigging specification you use. The image above shows the traveler set up, which consists of two fairleads mounted on the back corners of the boat and a single cleat mounted just aft of the cockpit on the deck. There are a few components to this area we'll mention here for your reference: 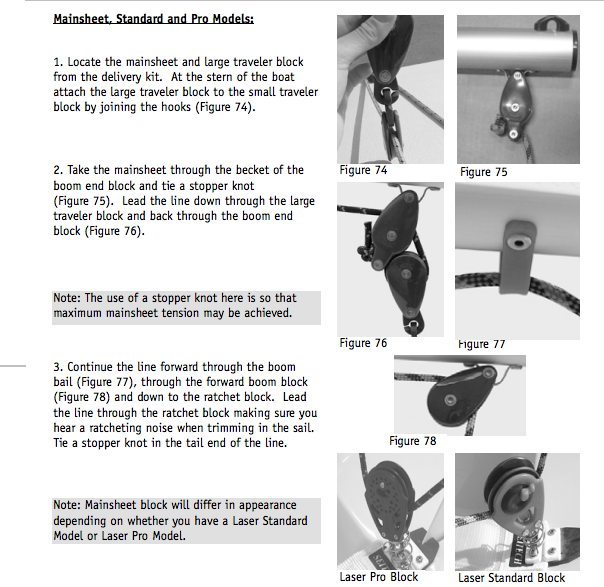 Regardless of specific rig set up, the Laser mainsheet is rigged the exact same way. The mainsheet system includes a ratchet block attached to the deck just forward of the cockpit, two blocks mounted on the boom, and a set of traveler blocks at the rear on the deck. There are a few different components and some upgrades we'll reference here. 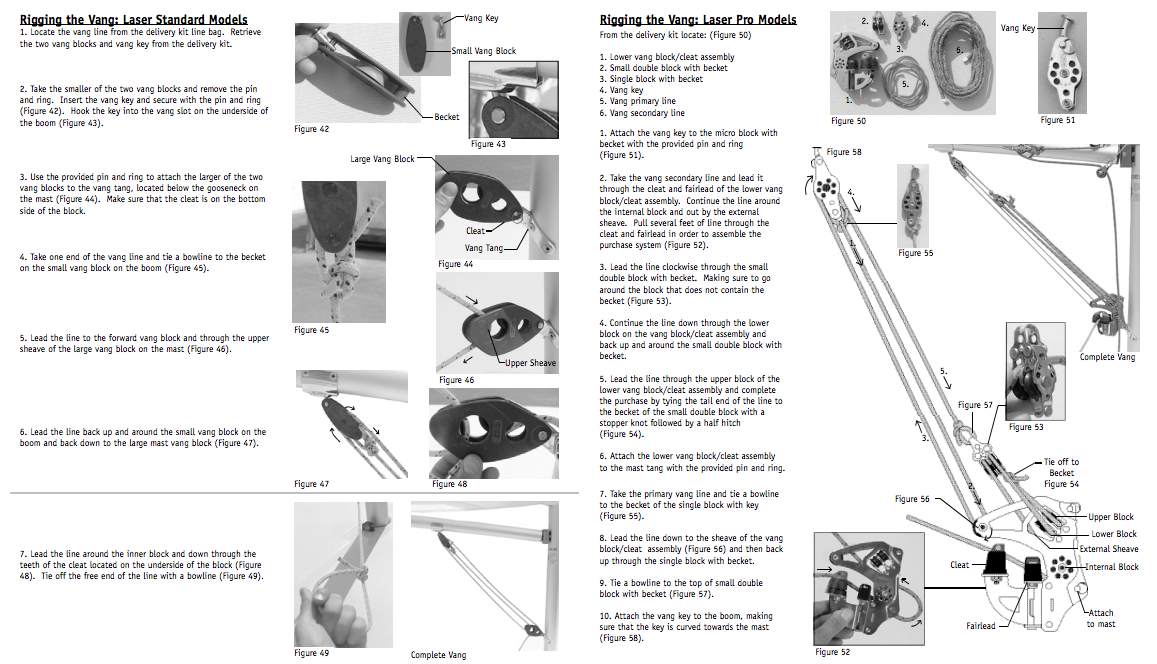 The Laser boom vang is a series of blocks and line that connect to the boom with a key style fitting for quick removal and to a tang fitting with a pin at the base of the mast just above the deck line. 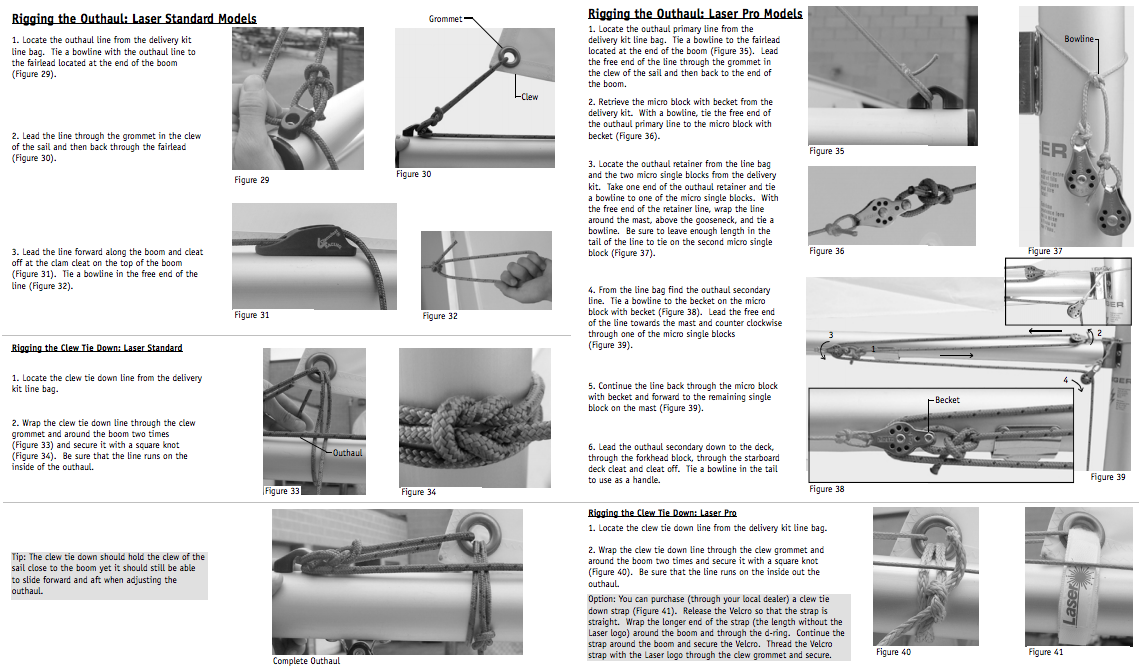 The outhaul controls the back corner, or the clew, of the sail. The 'rec' / classic rigging is quite simple, whereas the 'race' rigging adds more power to the sail control, making it easier to adjust and flatten the sail to depower in heavy wind. 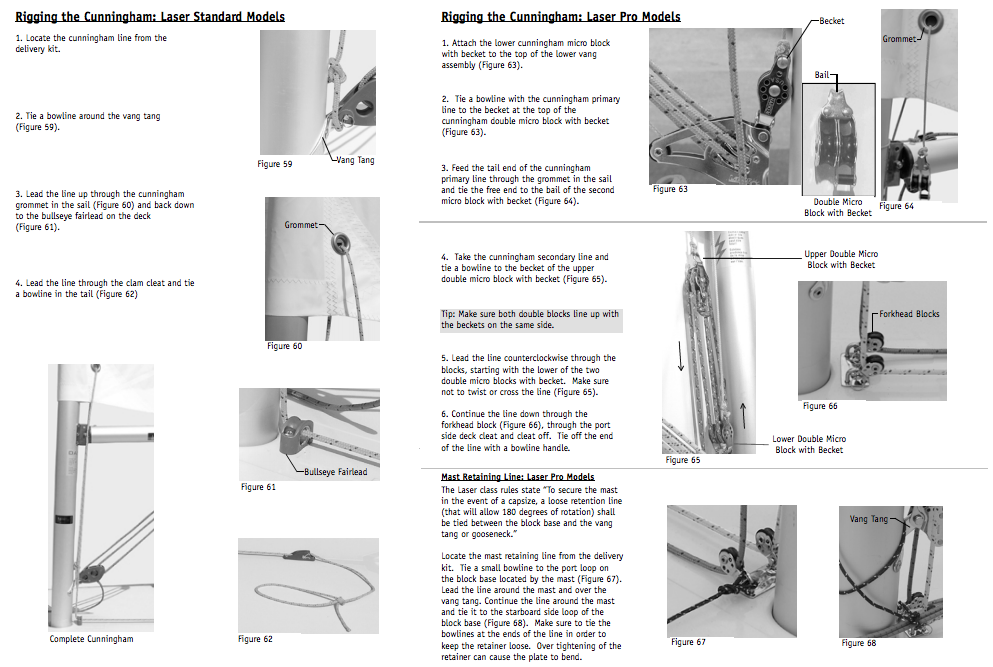 The cunningham, sometimes called the downhaul, controls the front edge of the sail The 'rec' / classic rigging is quite simple, whereas the 'race' rigging adds more power to the sail control, making it easier to adjust and flatten the sail to depower in heavy wind.