The following is a regatta report from Toshi that will also appear in the next issue of LaserSailor magazine. 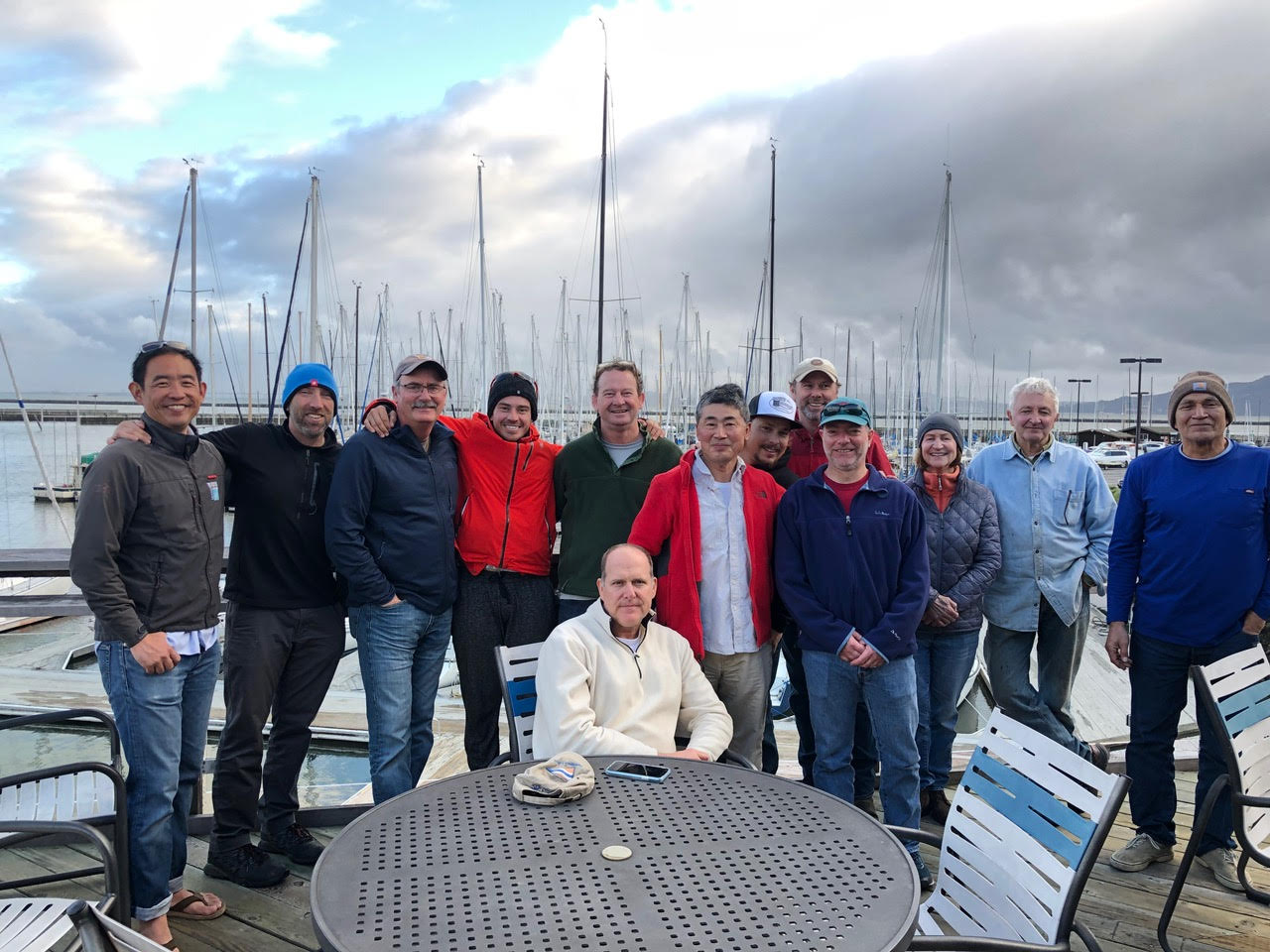 The weather condition, race course overview and my general sailing strategy: The wind was light side but decent: 6-8 knots earlier in the day, and later picked up to 12 knots. The wind direction was southwest, around 215° in center, and occasionally shifting back and forth by 15°. I am always puzzled about the current around the RYC, but the moderate current was flowing from the left to right in the race course at least for the first two races. This was indicated by the committee boat direction whose stern was perpendicular to the wind, but this seemed very different from the bay’s main ebbing current direction. There were non-negligible short waves for the light wind, whose direction was a little skewed from the wind, so in the upwind, careful body movement was needed not to lose the speed (I also pulled the downhaul a bit to cope with the waves), and in the downwind, up-turn to the broad reach from the starboard by-the-lee often worked well to get a little bit of surfing. The start-line was set to 110-120°, and pin end (right side of the line) was rather favored in all the races. Therefore the pin side was always crowded, but I was able to hold reasonably good positions, except for the last race in which Julian pushed me out! Since the start/finish line was restricted, in the downwind we needed to pick which end to pass. I always picked the finish pin side, as I thought passing the start pin side would be a longer distance and need to approach the bottom mark against the current, but there might not have been too much difference, observing how the two fleets converged. Each race detail is as follows:

Race-1 (once around the course): I was able to start from the pin end, but with many boards in the leeward side, I felt it is hard to maintain good boat speed, so I tacked to the port seeking for clear air and free space. But soon tacked back to the starboard, as I did not want to go too much right, since the starboard was a longer tack. In the middle I tacked taking a noticeable shift, but tacked back to the starboard several boat length below the starboard layline, anticipating the current and possible shift might lift me. This worked out well. On the way, a couple of sailers crossed ahead of me to reach on the layline, but I was barely able to reach the top mark in the first place without needing additional tacking. But many sailers were closely after me. I was too busy about moving away from the mark as quickly as possible, my mind was not clear about where to set the direction or where I should position myself in the fleet, ending up with a confused position. Julian passed me from the windward side and Emilio passed me from the leeward side. Still, rounding the bottom mark in the third place, I soon tacked to sail the left side to reach the finish line. But somehow, I had a very bad run of this. In this short upwind, I was passed by 5 boats and ended up with finishing 8th. I could not understand why I lost so much. Maybe there was a better breeze in the right side? Ryan said he passed as much as 10 boats in this upwind leg, so maybe he can tell what happened...

Race-2 (twice around): My first upwind leg was not great, rounding the first mark around 10th. I might have passed one or two boats in the downwind, but there were still many boats in front when rounding the bottom mark. But the next upwind was my best run of the day. While most of the sailers went to the right, soon tacking to the starboard, I recognized the angle towards the top mark looked very good, which meat I was lifted. This was something I had started practicing: Instead of relying too much on the compass, check the boat angle against the mark to understand whether this is lifted tack or headed tack. I thought, “Ok, this is the lifted and long tack... Then, I should continue this course!” This long starboard run turned out to be really good. Tacking to port to approach the top mark, I was also helped by additional lifts. I was able to round the mark in the second, next to Julian and ahead of Emilio! Emilio teased me, yelling, “Toshi, where did you come from!?” I maintained the position for the next two legs and finished in second.

Race-3 (twice around): Rounded first top mark in 3rd or 4th place. In the second upwind, Julian, Emilio and Lance went to the left side ahead of me, but in 3/4 of the course they tacked to the right and crossed me. It was not that I was committed to the left, as the boat angle was not as good as the previous race, but I continued the course as I could not find a good chance to tack; there were occasional headers, but it tended to shifted back shortly after, so I ended up with going to all the way to the left again. Tacking on the layline to approach the top mark, I was able to get a very good lift. This was a pure luck! Once again, I was able to pass a couple of sailers including Emilio who approached the mark from right side, rounding the mark in the 2nd following Julian. At one point in the downwind, Emilio and Roger almost caught up with me, getting a very good puff (I could hear it from the sound of the boats). I should have more looked around the back side to check from where the breeze was coming down. But I re-positioned myself in time to catch the puff and I maintained the position to the bottom mark. In the final upwind to the finish line, the wind picked up to 12 knots and I was in the full hiking mode. It was already about my upper limit range in the standard rig without doing massive de-powering, and in that condition, I could not compete with Emilio in speed. He passed me and I finished in 3rd.

Race-4 (once around): While the pin end start worked out well for the previous three races, in this race Julian positioned leeward of me and he shut down the space between him and the pin. I was pushed out from the start line. I wish I could be equipped with the technique to move backward even in the narrow boat space. I had to go back to the line to re-start from pretty much the bottom position. But the top mark position was not as bad as I thought, and I was able to pass a couple of boats in the downwind leg, using by-the-lee to broad reach up-turn effectively to surf, and finished in 8th.

Overall: I was pretty happy with finishing in the second place overall. The light side wind certainly helped me in the standard rig, but there were many strong sailers in the races, so I am proud of myself. Good points were: Reasonably good starts, good boat speed, being able to recognize the lifted tack (which I am usually very bad about). Bad/improvement points were: Missing awareness of where the breeze is coming from and how the other boards are positioning/moving, pre-start boat handling techniques in the restricted boat space. Looking for the next event!